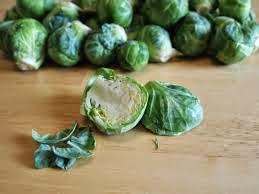 Food Friday is my weekly homage to my favorite thing on Earth- FOOD!  I haven’t always felt this way.  I used to view food as the enemy.  But no longer!  I love food- it helps me meet my performance goals, nourishes my body, and most importantly keeps me healthy so I can make a difference in this crazy world.  So every Friday I will be posting about one of my favorite foods.  It may be a plant or animal, single ingredient or recipe, or whatever I feel like (hey- it’s my blog afterall).

If there is a particular food you would like me to talk about, recommend it in the comments!

Hold it.  How many of us rallied against our parents to keep Brussels Sprouts off our plate?  Because really, cabbage is suspect all by itself… but mini smelly cabbages are downright offensive.  In fact, a 2008 Heinz survey ranked Brussels Sprouts as the most hated vegetable in America.I get it.  I hated Brussels Sprouts before I even tried them.  What kind of Regina George vegetable has a reputation like that?Well, Brussels Sprouts are very, ah, fragrant when overcooked.  The traditional method of cooking was to boil them- assuring they were mushy and smelly.

But just like thick rimmed glasses and baggy sweaters, what’s old is new again.  Brussels Sprouts are back in a big way.  Restaurants are making a name by making them tasty.  Hipster foodies buy them locally.  And of course, they’re Paleo.

Brussels Sprouts pack a punch of nutrients and are super easy to make.  So if you haven’t already, get daring and add some to your meal plan today!

P.S.  Does anyone else say Brussel Sprouts??  I did… until about two days ago.  It’s really Brussels Sprouts…. because modern versions were cultivated in Belgium!

Readily available in most grocery stores, Brussels Sprouts are usually located by the big cabbage.  Do you think that makes them feel inadequate?But really, buy and cook them fresh.  Frozen Brussels Sprouts tend to be bitter and slimy.

I typically cut the sprouts in half or even quarter them.  Be sure to chop off the hard white stem portion at the bottom.  If the outer leaves are looking a little yellow, you can peel them away.  And with all veggies, wash them well.

Let me say this once…

Roasting Brussels Sprouts is the way to go.Some people like them steamed, but I think that makes them taste like mini-cabbage mush balls.  So if that’s your jam, go for it.  A good roast gives them crispy outer leaves and well cooked inside.  You can also peel the leaves and make chips.You could also skip the cooking and slice them to make a winter slaw!

These sprouts have just the right about of crisp and are a great side dish for anything from ribs to chicken to hamburgers.  Or by themselves as a snack!Ingredients:1 lb Brussels Sprouts
1/2 Cup Chopped Ham (or sub 4 pieces of chopped bacon)
2 TBS Coconut Oil (melted)
1/2 tsp pepper
1/2 tsp sea saltInstructions:1. Pre-heat the oven to 400 Degrees F.

2. Cut the white stalk off of the Brussels Sprouts and cut in half

4. Spread evenly on a baking sheet.

What do you think?  Do you like Brussesls Sprouts or would you rather put your head through a wall?  If you love them, share your favorite recipes in the comments below!